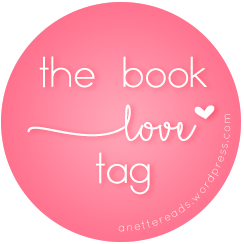 Today I come to you with another Book Tag, all about LOVE (DUH! 🙄 ) And it is perfect for today, seeing as today, is Valentines Day!  The Book Love Tag was created by Anette, @ Anette Reads. BIG Thanks to Anette for tagging me! 🙂 Let’s get started!

3. Imagine your favorite book couple. Who would propose, and how? (If there’s already been a proposal: who would be more into organizing the wedding?)
Between Rose and Dimitri, I have a feeling that Rose would be the one to propose. Between Lola and Cricket, Cricket would propose, and I don’t know how they would do it, but I just know, that they will both be VERY awkward. Especially between Rose and Dimitri!

4. Unpopular opinions time! Name a popular pairing you can’t stand.
Bella Swan and Edward Cullen. I know I didn’t read the books, but I did see one or two of the movies, and their relationship is gross and unhealthy. She is just way too obsessed with him, and I just feel like he does not wrong in her eyes. It’s just pathetic!

6. Do you ship non-canon couples often? Name some if you do.
No. I like to keep the good couples together. They actually have to have chemistry for me to even thing about them as a couple. And they have to have interacted with each other for me to even think about them getting together. I can’t just take two random characters, from the same, or even different books, and put them together. That’s just not my style.

7. Your opinion on love triangles. Go!
Like I said before, if they are done right, they are great. If they are badly done, they get old and annoying real quick!

9. Sometimes romance just isn’t the way to go. Favorite friendship?
I have two! Lula & Rory from Weird Girl, and What’s His Name by Meagan Brothers and Olivia & Jamie from Drowning Is Inevitable by Shalanda Stanley.

10. What’s your favorite scene with your bookish OTP?
I don’t even know! Hmm let me think…
In Last Sacrifice, when Dimitri FINALLY admits to loving Rose, but says he’s not going to do anything about it, because she already has a boyfriend. That the honorary thing to do is walk away, and let them be happy. Then Rose says shes not anyone’s property and she belongs to herself, and once again Dimitri, argues that she already as a boyfriend. Then Rose tells him that maybe she has a boyfriend, but she was meant for him (Dimitri). ❤ ❤ ❤ ❤

11. Imagine your favorite book couple again. Who’s most excited about Valentine’s Day (either ironically or genuinely)?
Out of Cricket and Lola, I think Lola would be more excited about Valentines Day. She would get all dressed up, and want everything to be perfect and romantic. Of course Cricket would set up everything, but I think Lola would be more serious about everything being perfect. 🙂

Thanks again to Anette for creating this tag, and tagging me! 😀

3 thoughts on “The Book Love Tag!”