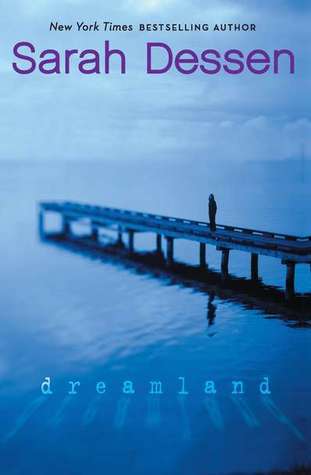 Synopsis: Ever since she started going out with Rogerson Biscoe, Caitlin seems to have fallen into a semiconscious dreamland where nothing is quite real. Rogerson is different from anyone Caitlin has ever known. He’s magnetic. He’s compelling. He’s dangerous. Being with him makes Caitlin forget about everything else–her missing sister, her withdrawn mother, her lackluster life. But what happens when being with Rogerson becomes a larger problem than being without him?

My Thoughts: I have read a ton of reviews on this book and I have to say I am pretty shocked at the content of a lot of them. Of course, I cannot expect everyone to like every single book that I like or see every story the same way I see it, but I am actually confused by the arguments being made for disliking this book. In general what I am seeing is that, although it was a good story, a lot of people have an issue with the “poor choices” the main character, Caitlin O’Koren, has made and they cannot understand how or why she would stay in a relationship where physical, emotional and mental abuse were taking place. It amazes me how little empathy people have and how they miss the point completely. It also shocks me that people are so focused on the reasons Caitlin stayed (which are pretty clear to me) rather than the reasons and the facts of what Rogerson was doing to her. Rather than condemning Rogerson for being a manipulative brutalizer, they are judging Caitlin, a lost teenage girl, for “allowing” something like this to happen to her. The book itself is a sad one, but I find these responses to it even more heartbreaking.

When I think of Sarah Dessen, I always think of a strong, solid story and well developed characters. While this book was one of her shortest, I still think that she was able to incorporate both of her signatures into this book smoothly and although Caitlin’s story is much darker than her more recent books, it had the same strong effect.

Caitlin was, in a word, lost. She didn’t really know who she was which isn’t all that uncommon for girls her age. She was used to always coming in as second best and with a “perfect” older sister like Cass, that was not a hard thing to do. That was something that Caitlin had grown used to and seemed to accept it…She was also used to Cass leading the way, she never had to worry about getting along because there was always a clear cut path for her to follow. That is why her entire world was turned upside down when Cass ran away… Cass was no longer there to point her in the right direction. The path disappeared; Cass covered all of her tracks. With Cass gone, Caitlin makes an attempted to create her own path, full of stops and decisions that Cassandra the great would never make. As lost as Caitlin feels without her, in some ways she feels free… like she can become her own person.

Not only is Caitlin stuck in Cass’ shadow, she was also stuck her best friend, Rina’s shadow. Rina was your typical popular cheerleading hottie. Although, if we are being honest, with her charm and stunning good looks, Rina was more popular with the male population than the female. Caitlin and Rina were the perfect match, even if they seemed so mismatched.

Caitlin-introverted and reserved and Rina- outgoing and lived a soap opera for a life… so different but both the same. Usually I am not a big fan of stereotypical characters like Rina, but of course, Dessen and her talent for creating complex characters (even background ones), makes it hard not to empathize. Her mother has been married too many times to count and her own father wanted nothing to do with her. She was searching for herself too, just in a different way that Caitlin was.

Cass… Where do we begin with Cass. At first glance, I can’t help but think about how selfish she was. She definitely had her reasons for the decisions she made, and in my opinion, they are somewhat valid. But she was also only eighteen and no eighteen year old really knows all that they think they do. Still, I cannot really fault her for making the decision to leave, but the way she did it and when she did it were my biggest issues. She gave no thought to her sister and how this would affect her. Yes, it was important for Cass to go and try to live her life by her own standards, but that didn’t mean she had to leave Caitlin the way she did. Caitlin would have eventually had to come into her own person regardless of if Cass ran away or just went off to college like she was suppose to weeks later, it is part of growing up. But she just threw Caitlin to the wolves and if anything, took up her parents time and attention even more in her absence which only left Caitlin more alone than ever.

Rogerson Biscoe was the first person who saw Caitlin as Caitlin, not Cassandra’s little sister or Rina’s best friend. He didn’t see her as lacking everything Cass and Rina had, her viewed her as her own person. He was also something different for her, something mysterious…a decision Cass would have never made. He was also from a prominent family in the city which includes a perfect brother, an even more perfect home complete with a narcissistic mother and an abusive father, and a drug habit. It was easy for me to empathize with the other characters (even her clueless absentee parents to a certain extend… okay maybe not them), but I definitely have no empathy or sympathy for him. Yes, I do know about the cycle of abuse and that those who are abused are more likely to abuse their partner and / or children, but I don’t understand it and I refuse to try to understand it. That behavior is deplorable and if you have been through something like that yourself, WHY(?!) would you want to inflict that on someone else? Especially someone you say you love. Mrs. O’Koren had it right, Rogerson was a straight up bastard and I couldn’t be more pleased when she showed up in Lock & Key as the loser we always knew he was.

This book was pretty somber the whole way through. If your are sensitive or triggered by violence or domestic abuse, this is probably not the book for you. The story was beautifully written and I felt every single emotion Caitlin did. I give it 4 Stars, but only because it started a little slower than I would have liked.
⭐ ⭐ ⭐ ⭐