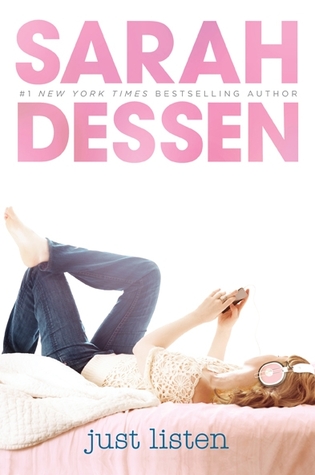 Synopsis: Annabel Green is “the girl who has everything” — at least that’s what she portrays in her modeling shoots. But Annabel’s life is far from perfect. Her friendship with Sophie ended bitterly, and her older sister’s eating disorder is weighing down the entire family. Isolated and ostracized at school and at home, Annabel retreats into silent acceptance. Then she meets Owen–-intense, music obsessed, and determined to always tell the truth. And with his guidance, Annabel learns to just listen to herself and gains the courage to speak honestly. But will she be able to tell everyone what really happened the night she and Sophie stopped being friends?

My Thoughts: By now, I have read a handful of Sarah Dessen Books (don’t worry, all of these reviews will be coming soon) and I have to say, I am pretty obsessed. Everytime I think she can’t get any better, she does it and I fall in love all over again. Sarah Dessen is a YA novelist but, her subject matters are so relatable and they give great insight and teach so many necessary life lessons that I believe anyone of any age could benefit from. She definitely knows how to put pen to paper (do people still do that?) and always leaves me wanting more.  Now, enough ass kissing, let’s get to the review.

So much happened in this story that I don’t even know where to begin. My head feels like it is going to explode just thinking about it.

Annabel Greene is introduced to us as the girl who has it all… Literally. The story opens with Annabel watching a commercial of herself for a local department store portraying “the girl who has it all.” I mean I guess it’s not far off from her actual life: She lives in one of the most coveted homes in her neighborhood (dubbed “the glass house” because, you guessed it, it is made of glass!), her father clearly has a great job, her mother is the All American stay at home mom, and she is the youngest of three beautiful tall blonde sisters who all just happen to be models. I mean, life can’t get better than that right? Soon we find out, that not everything is as it seems which continues to be the theme throughout this story.

Annabel is not only co-dependent, but she is also a push over. She never spoke up for herself and let people walk all over her and treat her badly because she was too afraid of confrontation. She was so busy worrying about other people’s feelings or what other people thought that she allowed herself to become stuck in a life and stuck in situations that she was unhappy being in. She told people what they wanted to hear, even if the words weren’t true (not lies per say…) Usually I have some pretty strong feelings about characters like this and would have a few choice words to say about them growing a pair, but because she is so young and because of all of bad experiences she went through it makes sense and it’s hard not to be empathetic. And when I look at it, I realize how strong of a person Annabel was to carry all of the weight she did, even though it was unhealthy and she should not have had to do so. Luckily she meets someone who helps her realize the person she is meant to be and helps her find her voice.

Owen, Owen, Owen… How do I express my love for Owen? He was imperfect yet perfect all at the same time. Sarah Dessen sure does know how to write a good male character and so far he is be favorite. I didn’t think it was possible, but he dethroned Wes (I’ll get to him another time.) Owen was something else, he was a total outcast at school and really didn’t seem to care. Just as long as he had his ipod and music he was happy… And when I say music I mean MUSIC. This guy listened to it all, from classic rock to Mayan chants he considered himself “enlightened.”  Yes, he had some anger management issues, but he was working on them and really putting in the effort to be a better person. He was very straight forward and and always said exactly what he meant. You didn’t have to wonder if you could trust him or anything he said because he was an open book, definitely not your typical leading man.

And then there was Sophie. I knew I hated Sophie from the moment she was introduced to us as a snotty little 12 year old wannabe. Sometimes I forget, how evil 12 year olds can be. Granted, she did have some personal issues with her father, but I personally do not believe you get a pass for treating people horribly just because you are going through it. We all have issues and if we all walked around treating people like garbage, just imagine what the world would be like. The only reason she started being friends with Annabel in the first place was because Annabel’s oldest sister called her out for stalking her clique. Sophie just wanted to hang out with the older popular crowd and when that didn’t work, she just settled with Annabel. That and she knew that she could take advantage of her and she would just go with it. The way she treated not only Annabel, but people in general was disgusting and her mom should be ashamed of herself for not realizing what a devil she birthed.

In this story Sarah touched on some very sensitive topics such as Depression, Eating Disorders, Sexual Assault, Anger Management, PTSD and Codependency and she did it with style and class. She was definitely on her A game once again and there are a lot of authors who could learn a lot from her.

I think you can already tell that is book gets 5 Stars. I would recommend this to everyone of any age.
⭐ ⭐ ⭐ ⭐ ⭐