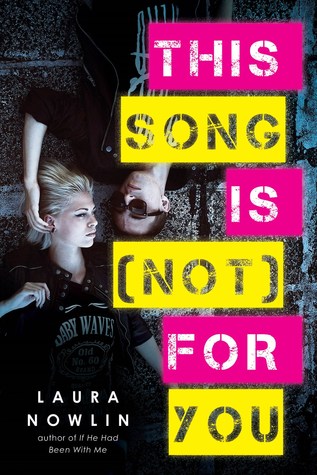 Synopsis: Ramona and Sam are best friends. She fell for him the moment they met, but their friendship is just too important for her to mess up. Sam loves Ramona, but he would never expect her to feel the same way-she’s too quirky and cool for someone like him. Together, they have a band, and put all of their feelings for each other into music.

Then Ramona and Sam meet Tom. He’s their band’s missing piece, and before Ramona knows it, she’s falling for him. But she hasn’t fallen out of love with Sam either. How can she be true to her feelings without breaking up the band?

My Thoughts: What did I just read? Seriously…This is not a rhetorical question. I am very disappointed to say the least. The little world the three main characters created was in a word, was unreal. Everything was just too perfect. They reminded me of three hippies high on acid, in far away dream world. But probably the biggest issue I had with this book, is the fact that you never get the truly know the characters. Yes, you do get all of this information about them, but is like you don’t all at the same time. It all just felt…empty.

I was not a fan of Tom, plain and simple. I wish he could just be written out of the book. I’m sorry but he was just too much. I have no problem with his sexuality, it was actually nice to see a character who was different in a way that I have never been exposed to before. That being said, I feel like his story fell flat. I feel like his sexuality was not made clear, which I think is necessary when you are touching on a subject matter such as this one. Usually, in storylines like this, the author take this time as a chance to educate the audience about something that many people are ignorant to and that was just not the case this. I didn’t really learn anything new other that he doesn’t like sex. I think there is way more to his sexuality it than that and I would have liked to have seen that explored a bit more. Plain and simple, his story was just very poorly constructed. Tom’s personality sucked. He was in his feelings too much, a bootleg hipster if you will.  He is one of those people who act like they know better and acted like the life he had was too good. He thought that no one was allowed to be happy or content because there are other people who don’t have it as good. Yes, it is always good be be aware aware that there are people less fortunate and you should always give back and give charity as much as you can, but you are allowed to enjoy the life you have and be grateful for it. What is even worse is that he was so hypocritical about it, he criticizes a fast food poster and uses it as an example for consumerism, yet he had no problem eating that same burger from that same restaurant while doing so. Also:

Ramona, Ramona, Ramona…Little miss was just all over the place. Now, I do want to start by saying that yes, the girl  had some really traumatic experiences with her mother dying and I do not take that lightly, but calm down sweetie. She didn’t know what she wanted, yet she looked to others to somehow figure it out for her and give it to her all at the same time. I know, I know she is a child and she is trying to figure herself out, but she wanted to have her cake and eat it too. One minute she loved Sam and then the next minute she loved Tom, and then she wanted them both. Get over yourself greedy! What she really needed to do was love herself, the only person who can give her what she wants is herself. Maybe after she realizes that, she will be able to choose one, or NONE.

I think the only person that I liked a little sparkle for (no pun intended), was Sam. He could have been so much better if he didn’t buy into Tom and Romana’s bullshit. I have a gut feeling that he didn’t  like Tom as much as he acted like he did. He just wanted Tom around because Romana wanted him around, and Sam will do anything for the girl he loves even if that means sitting on the sidelines while Sir Thomas McGlitter runs off into the sunset with his girl. That in himself made him look just plain pathetic in my eyes.

This whole situation is just weird, and made me feel a bit uncomfortable in the end. I really was hoping this book was going to be epic, but it was a big failure from beginning to end. I feel like this  book was so long, but then I realized was actually pretty short and nothing even happened. It was like a trick. At the end of the day I gave This Song Is (Not) For You, 2 Stars…. and that’s only because I don’t have the heart to give it one.