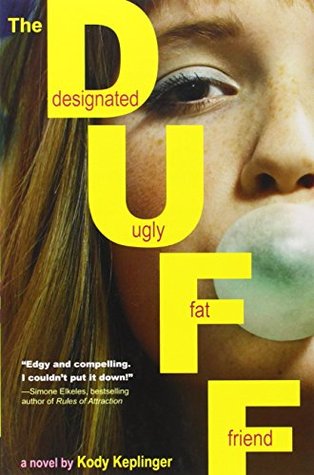 Synopsis: Seventeen-year-old Bianca Piper may not be the prettiest girl in her high school, but she has a loyal group of friends, a biting wit, and a spot-on BS detector. She’s also way too smart to fall for the charms of man-slut and slimy school hottie Wesley Rush, who calls Bianca the Duff–the designated ugly fat friend–of her crew.

But things aren’t so great at home and Bianca, desperate for a distraction, ends up kissing Wesley. Worse, she likes it. Eager for escape, Bianca throws herself into a closeted enemies-with-benefits relationship with him.

Until it all goes horribly awry. It turns out Wesley isn’t such a bad listener, and his life is pretty screwed up, too. Suddenly Bianca realizes with absolute horror that she’s falling for the guy she thought she hated more than anyone.

My Thoughts: This book was THE BOMB, I can’t even talk about it…BUT I WILL!! I was first supposed to read The Duff for Readalongs with April. Of course that didn’t happened. Then the movie came out in the Redbox, and I just couldn’t wait so I watched it, and I LOVED it. So I was like I HAVE TO READ THIS BOOK and Sir, am I glad I did. This book is the best thing that ever happened to me. It is super clever and witty! I think it is the funniest YA book I have read all year. Once I picked it up, I couldn’t put it down. I literally read it in one sitting.

Bianca is my #1. She is smart, sarcastic, hilarious, and honest to a fault. Usually YA books don’t have me laughing out loud, but with this book, I couldn’t help it! Bianca is a firecracker and just plain crude…and I LOVED it! Bianca is a real person. In a lot of YA stories the main characters are very much a stereotype. Whether they are the princess or the misfit, a lot of them are interchangeable, drop these characters in a different book and they would fit in just the same. They have one personality and in real life, no one is just one thing. Bianca is a true original.

Now, let’s talk about Mr. Wesley Rush. I’m pretty sure that if he were someone I knew in real life, I would have hated his guts, but somehow the author made him likable. Although, there were times where, I did want to pop him in his jaw over some of the idiotic shit he said. I am glad Bianca Cherry Coked his ass, it was very much deserved.

Usually, in these stories, you don’t actually root for a guy like Wesley Rush until he gets the girl and proves that he is not just another run of the mill douche bag. Keplinger made subtle choices when creating this character to show us that he wasn’t who everyone thought he was.

And then there was Toby Tucker…Irrelevant.

I think the only thing that really shocked me in a bad way, was when her dad knocked her upside her head. I was like, DID THAT JUST REALLY HAPPEN!? What’s even worse is that in the end everything was all hunky dory like nothing ever happened. Your dad knocked you on your ass and you are okay with it the next day? What is going on!? Too much! It would have been easy to make Bianca’s situation with her parents cliche, but it definitely wasn’t. I have never experienced anything like that personally, but I feel like the story was told very honestly. Her mother could have easily been dubbed the villain (I mean, I still think she is a pig) but the author did it in a way that was unexpected. There were no affairs, no secret children, she was just simply unhappy. The way she handled it was completely selfish, but after her explanation, you couldn’t help but sympathize. And extra points for it not being done in typical YA fashion. Don’t get me wrong, I love me some YA juice, but the whole terrible parent gig can get a little repetitive.

Now, let’s talk about the movie. Some people might not like/hated how different the movie is from the book, but I personally love it. They both do a great job getting the point across, telling the exact same story, two different way. I think they did a great job with casting the movie. Mae Whitman is the PERFECT Bianca! Wes was way hotter in the movie than he we in the book, and if you can believe it, even more charming. Although Madison Morgan didn’t even exist in the book, I think she was a good addition. Bella Thorne played an amazing, popular, crazy bitch! I will watch this movie over and over and OVER again. 🙂

I already know that I will reread this book again and again! If you haven’t read it yet, WHAT ARE YOU WAITING FOR!? I gave The Duff  5 Stars!

7 thoughts on “The Duff Review.”