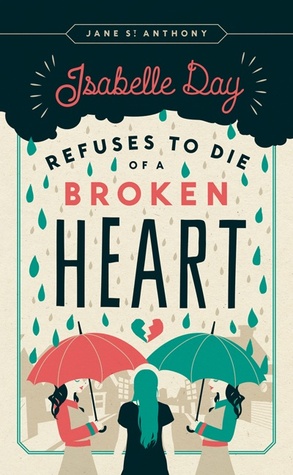 Book: Isabelle Day Refuses To Die Of A Broken Heart.

Synopsis: In Milwaukee, Isabelle Day had a house. And she had a father. This year, on Halloween, she has half of a house in Minneapolis, a mother at least as sad as she is, and a loss that’s too hard to think—let alone talk—about. It’s the Midwest in the early 1960s, and dads just don’t die . . . like that.

Hovering over Isabelle’s new world are the duplex’s too-attentive landladies, Miss Flora (“a lovely dried flower”) and her sister Miss Dora (“grim as roadkill”), who dwell in a sea of memories and doilies; the gleefully demonic Sister Mary Mercy, who rules a school awash in cigarette smoke; and classmates steady Margaret and edgy Grace, who hold out some hope of friendship. As Isabelle’s first tentative steps carry her through unfamiliar territory—classroom debacles and misadventures at home and beyond, time trapped in a storm-tossed cemetery and investigating an inhospitable hospital—she begins to discover that, when it comes to pain and loss, she might actually be in good company.

In light of the elderly sisters’ lives, Grace and Margaret’s friendship, and her father’s memory, she just might find the heart and humor to save herself. With characteristic sensitivity and wit, Jane St. Anthony reveals how a girl’s life clouded with grief can also hold a world of promise.

My Thoughts: The story was just a story and I couldn’t relate to anything because everything felt rushed or fake. Isabelle’s dads death is sad, but you never feel sad about it because one moments her sadness is there, then the next moment she’s obsessing over her new friendship with Margaret. The shocking part of her dads death was underwhelming. Usually books build up suspense that has you thirsty for it. There was absolutely no build up. It was just like here…have it. I just wasn’t shocked.

Isabelle Day Refuses to Die of a Broken Heart, didn’t live up to its description. Yes, Grace was a little rude, but I wouldn’t call her “edgy” and Sister Mary Mercy wasn’t “gleefully demonic” at all. They tried to make this book sound more juicy than it is.

While reading, I never really felt a connection with any of the characters. Usually there’s a stand out character that isn’t the main character, but is OUT there. Not in this book. Everyone was so…plain. The book is short, so there isn’t much time for the characters to develop.

After reading the description, I was hoping the sister landladies, Miss Flora and Miss Dora, would be like Miss Spink and Miss Forcible from Coraline by Neil Gaiman. Sadly they weren’t. They were pretty boring. Isabelle made then seem weird and creepy but in the end they weren’t even close. Their personalities were not as great (big) as I was thought they would.

This book was WAY too short and lacked detail. In the end, this book was not for me. I gave it 2 Stars.

One thought on “Isabelle Day Refuses To Die Of A Broken Heart.”