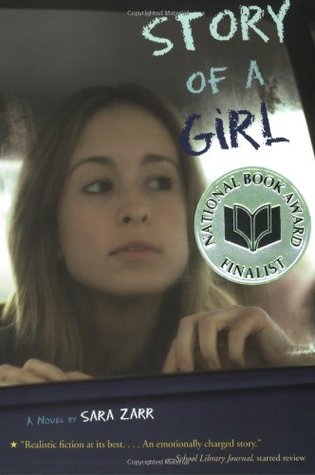 Book: Story of A Girl.

Synopsis: (From Book) I was thirteen when my dad caught me with Tommy Webber in the back of Tommy’s Buick, parked next to the old Chart House down in Montara at eleven o’clock on a Tuesday night. Tommy was seventeen and the supposed friend of my brother, Darren.

I didn’t love him.

I’m not sure I even liked him.

In a moment, Deanna Lambert’s teenage life is changed forever. Struggling to overcome the lasting repercussions and the stifling role of “school slut,” Deanna longs to escape a life defined by her past. With subtle grace, complicated wisdom and striking emotion, Story of a Girl reminds us of our human capacity for resilience, epiphany, and redemption.

My Thoughts: It’s sad to say that we live in a world where no matter how hard you try to get away from it, there is always going to be some jerk around to remind you of your mistakes.

Yes, Deanna was doing something she had no business doing at that age, but maybe if her parents had paid more attention or were more strict, she would have never been running around with that perv Tommy.

I don’t think Tommy learned a lesson either. How she reacted, scared him. That’s it. He is a predator, he doesn’t think he is doing anything wrong. I wish her dad had turned him in because I doubt Deanna will be the last young girl he interacts (in that way) with.

Nothing seems to have been resolved in the end. I’m glad that she FINALLY said something to he dad, but his feeling aren’t going to change over night.

Overall this book was okay, I gave it 3 Stars.