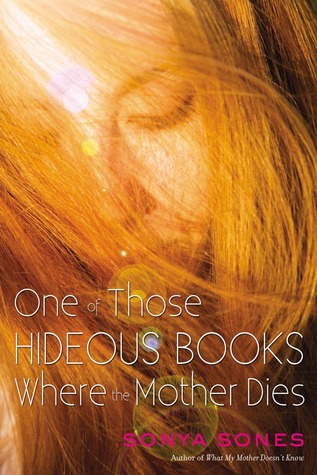 Book: One of Those Hideous Books Where the Mother Dies.

Synopsis: (From Book) When Ruby’s mother dies, she’s dragged three thousand miles away from her gorgeous boyfriend, Ray, to live in LA with her father, who she’s only ever seen in movies. He’s a mega-famous actor who divorced her mom before Ruby was even born, and while the rest of the world may love him, Ruby definitely does not.
But as time passes and pages turn, Ruby comes to understand that circumstances are far more complicated than they seem, and sometimes forgiveness is found where you least expect it. This award-winning and bestselling novel in verse weaves a gripping narrative that is accessible as it is compelling.

My Thoughts: I really liked this book. I couldn’t put it down, I ended up reading it in one sitting.  At first I hated how it was written in verse, I thought it could have been a better/longer book of it was normal, but in the end I found to to be perfect as it is.

The only real downside is the fact that this book is a bit predictable.  I just knew Ray was gonna cheat on Ruby with her best friend Lizzie.  That always seems to happen in book/movies/tv shows where the main character is forced to move away leaving her boyfriend and best friend behind. She was to busy worrying about Ray falling for the schools skank Amber, when you should have been worried about her lonely best friend. Yeah, I know she shouldn’t  have had to worry about her best friend stealing her boyfriend, but you never know how people are going to react when they are both missing you.

I also wish she was more specific about how her mom died.  Yeah I did gather that she most likely died from cancer, but she should have been more open about her mom’s death. Speaking of her mom, once she mentioned that she believed her mom was prejudice against Gay people, I knew that her dad was gay.  (I also knew that Max was his man.) Also, I know that her not wanting her to be around her dad was wrong, but her Aunt Duffy was VERY wrong when she was sneaking around letting Whip see Ruby when she was little. Yes he has the right to see his own daughter, but i just feel that she was crossing the line.

Another thing that I wish was different were the celebrities. I wish she made up her own fake ones. It just felt odd every time she mentioned Cameron Diaz.

The book was a bit chichè but I still loved it. Everyone should read it! Can’t wait to read more from Sonya Sones! I gave this book 4 Stars.