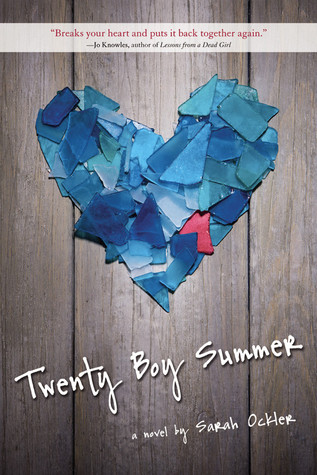 Synopsis: (From Book) According to her best friend Frankie, twenty days in Zanzibar Bay is the perfect opportunity to have a summer fling, and if they meet one boy every day, there’s a pretty good chance Anna will find her first summer romance. Anna lightheartedly agrees to the game, but there’s something she hasn’t told Frankie—she’s already had that kind of romance, and it was with Frankie’s older brother, Matt, just before his tragic death one year ago.

My Thoughts: I’m very happy to say that I really enjoyed this book.  I’ve seen this book around for a while, but I never picked it up.  I remember taking the book off the shelf, and reading the synopsis, but once I reached the part about a boy a day for twenty days, I was like “No Thanks!” I’m soooo glad my Summer Reads swap partner Courtney, picked it out for me, I would have missed out on a great book.

Anna and Frankie’s friendship became toxic after Matt died.  Anna just went along with whatever Frankie said, just to make her happy.  Frankie wasn’t the only person who lost someone.  Yeah Matt wasn’t Anna’s blood brother, and let’s put aside their secret relationship, but Matt and Anna were so close, they  practically grew up together.  So her sadness shouldn’t be lessened to nothing just because they weren’t related.  You can’t spend almost everyday of your childhood with someone and not feel as horrible about it when that person is gone.

I know they were both keeping secrets from each other, but in my opinion, Frankie’s was slightly worse.  Yeah, Anna was seeing her older brother, but if Frankie didn’t lie about not being a virgin/wasn’t being so pushy about Anna losing hers too, then I don’t think Anna would have had sex with Sam.  It would have been more “special” as she wanted it. Anna liked Sam, but i don’t think she like him well enough or long enough to have sex with him so early on in their relationship (if we can even call it one).  I think she just did it to please Frankie.

I’m sorry to say that I was actually rooting against Sam.  I didn’t want her to lose her love for Matt, and in the end I feel like she did.  I know it has been over a year since Matt died, but for her to be so torn up about him one minute, and drooling over Sam the next, was very disappointing.

Don’t get me wrong, I still loved the book.  It was a great story.  Very entertaining. Sarah Ockler is now one of my favorites. I gave Twenty Boy Summer 4 Stars.