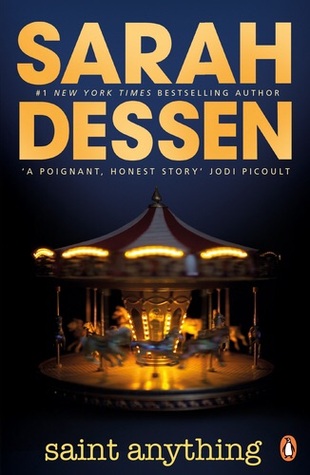 Synopsis: (From Book.) Peyton, Sydney’s charismatic older brother, has always been the star of the family, receiving the lion’s share of their parents’ attention and—lately—concern. When Peyton’s increasingly reckless behavior culminates in an accident, a drunk driving conviction, and a jail sentence, Sydney is cast adrift, searching for her place in the family and the world. When everyone else is so worried about Peyton, is she the only one concerned about the victim of the accident?

Enter the Chathams, a warm, chaotic family who run a pizza parlor, play bluegrass on weekends, and pitch in to care for their mother, who has multiple sclerosis. Here Sydney experiences unquestioning acceptance. And here she meets Mac, gentle, watchful, and protective, who makes Sydney feel seen, really seen, for the first time.

My Thoughts:  Once again, I have read a book where the mother is delusional. Instead of being realistic about the situation and accepting that her son isn’t perfect, she goes around as if he has done nothing wrong.  She acts as if every bad thing he has done, is everyone else’s fault.

Luckily it seemed as though finally after years of making horrible decisions and getting into trouble, Peyton know that this time he had finally gone too far. Unfortunately for him, it was after he was on the straight and narrow for a year that he had one “slip up” that essentially cost him everything. At Least he was taking responsibility and accepted the fact that he was totally at fault in this situation and unlike his mother, he treated the situation for what it was. He knew that he deserved the punishment and it should not be treated like anything other than a punishment,

Ames, Ames, Ames… When he was first introduced, I knew that he was up to no good. That being said, my big question is HOW THE HELL DIDN’T HER PARENTS SEE IT TOO? I understand that you were preoccupied not accepting that your son was not in summer camp, that he was in PRISON, but COME ON! Ames was blatantly manipulative and insincere the fact Mr and Mrs. Stanford didn’t catch that  says a lot about what type of people they are. Your daughter was practically screaming that she did not want to be left alone with this sick freak, but you were so desperate to hang on to anything remotely resembling a son that you chose to ignore it. Exactly the way you choose to ignore your daughter in everyday life.

One the best parts of the story, is the relationship between Sydney and Layla. When Sydney first ran into Layla at the courthouse, Layla was well and ready to put Ames in his place.  She didn’t even know her that well, but she already had her back.

Sarah Dessen is on her A game, she is an amazing writer and her character development is on point. But even then it is more than just that, she creates people as people instead of the cliche “character.” These were actual people The depth of the characters is what brought this story together.  I gave this AMAZING book, 5 Stars!

2 thoughts on “Saint Anything Review.”