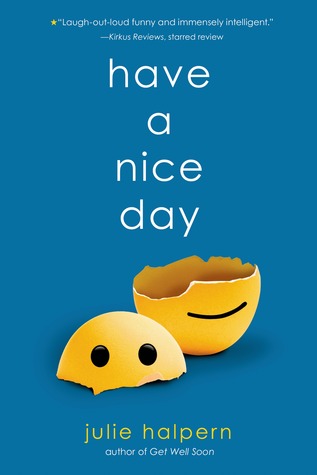 Synopsis:  (From Book.)Anna Bloom has just come home from a three-week stay in a mental hospital. She feels . . . okay. It’s time to get back to some sort of normal life, whatever that means. She has to go back to school, where teachers and friends are dying to know what happened to her but are too afraid to ask. And Anna is dying to know what’s going on back at the hospital with her crush, Justin, but is too afraid to ask. Meanwhile, Anna’s parents aren’t getting along, and she wonders if she’s the cause of her family’s troubles.

My Thoughts:  Before I read Have a Nice Day, I had said that I wished Get Well Soon was longer, but after reading this I take that back.  I would have found out sooner how annoying Anna really was.  I’m very disappointed.  Even though I really liked Anna in the first book, after reading Have a Nice Day I found her to be a very problematic person, and I am not talking about her mental state.  I feel like she just did certain things for the dramatic effect/she only did things because she was trying to be cool.  Yes, most teenagers want to be “cool” but come on girl.

She was VERY rude to her mom even though she knew it was wrong.  She acted as if she felt so bad for her, because of how disgusting her pig of a father was, but then she turned around and was doing the same thing.

The whole Justin story line ended up being a dud.  How can they both go from being obsessed, to “Oh let’s be friends.” I was surprised by how well she took it.  I’m glad she ended up with Tucker.  I just couldn’t believe how blind she was, I felt like screaming HE LIKES YOU, YOU IDIOT!  She was too busy obsessing over hurting Justin, when the two of them shared nothing but emotional issues, and a kiss.

It turns out that Have a Nice Day wasn’t as great as I’d hoped for.  The beginning seemed good, the middle was blah, and the end was okay. Overall, I feel like this could have been a better book. I gave it 3 Stars.

One thought on “Have A Nice Day Review.”