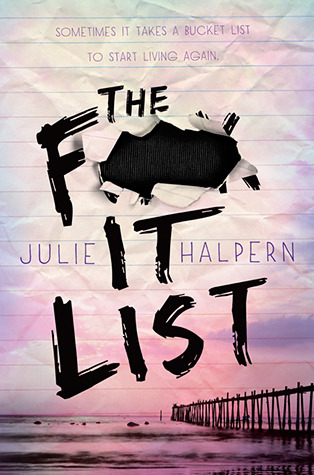 Synopsis:  (From Book.)  Alex’s father recently died in a car accident. And on the night of his funeral, her best friend Becca slept with Alex’s boyfriend. So things aren’t great. Alex steps away from her friendship with Becca and focuses on her family. But when Alex finally decides to forgive Becca, she finds out something that will change her world again—Becca has cancer.
So what do you do when your best friend has cancer? You help her shave her head. And then you take her bucket list and try to fulfill it on her behalf. Because if that’s all you can do to help your ailing friend—you do it

My Thoughts:  The F- It List was not at all what I expected.  It was really good, but not as sad or heartbreaking as I thought it was going to be.  To be honest I am glad it wasn’t.  The book probably shouldn’t have been called the F-It List because I don’t think it really focused on the list as much as it should have.  The list was mentioned quite a bit but they really didn’t do a great amount of tasks on the list.  I just don’t feel like it was a big part of the story.  There is more to it than just the list.  The story was more about Alex finding herself, and trying to be happy in her own skin.  She was too busy trying to make sure everyone else was happy and she wasn’t dealing with her own feelings after losing her dad.

I just think she should have taken time for herself instead of throwing herself into everyone else’s problems and trying to fix them.  Yes helping Becca with her list would make her happy, but it would not kill her cancer.  Alex was very hard on herself and she wasn’t good at expressing how she felt.  Just because life feels like it’s falling apart at times, that doesn’t mean you have to feel a certain way.  There are no strict guidelines that you must follow when people get sick or when you lose someone.  Also, you don’t have to feel bad for feeling good when others are having a crappy time.  It’s very important to take a timeout and you have time to yourself.  You can be there for others, but make sure you are feeling good and happy also.

That being said, it was a very bad idea for Alex to jump head first into a relationship with Leo.  Actually it wasn’t really a “relationship” at first.  They were both just using each other.  Alex was just using him to feel good at first.  Having sex with him came to fast. She didn’t even know him that long when they first had sex.  She was just using sex to make her forget about all the bad things that were happening.  Very unhealthy.  Leo was the same way, I think he was rushing into their relationship just so he didn’t have to think about his “Perfect” brother.  And when his brother ended up dying, he only told her that he loved her just because he wanted to feel loved by someone..If that makes any sense.  Yes, maybe they have always admired each other from afar, but they knew nothing about each other, so it was WAY too soon.  I know the world is changing and teens having sex is nothing new, but I’m a little tired of reading about teen having sex like it’s no big deal. It is a big deal and you never know what can happen.

Overall I think this was a good book.  It was hard to put down!  I gave The F-It List 4 Stars.